Warning: The magic method HM\BackUpWordPress\Notices::__wakeup() must have public visibility in /is/htdocs/wp10661992_23FCWG6Q2E/www/projects/wp-content/plugins/backupwordpress/classes/class-notices.php on line 46

Warning: The magic method HM\BackUpWordPress\Path::__wakeup() must have public visibility in /is/htdocs/wp10661992_23FCWG6Q2E/www/projects/wp-content/plugins/backupwordpress/classes/class-path.php on line 57

Warning: The magic method HM\BackUpWordPress\Extensions::__wakeup() must have public visibility in /is/htdocs/wp10661992_23FCWG6Q2E/www/projects/wp-content/plugins/backupwordpress/classes/class-extensions.php on line 35
 Tennis Ball Pressurizer – Only some projects
Skip to content 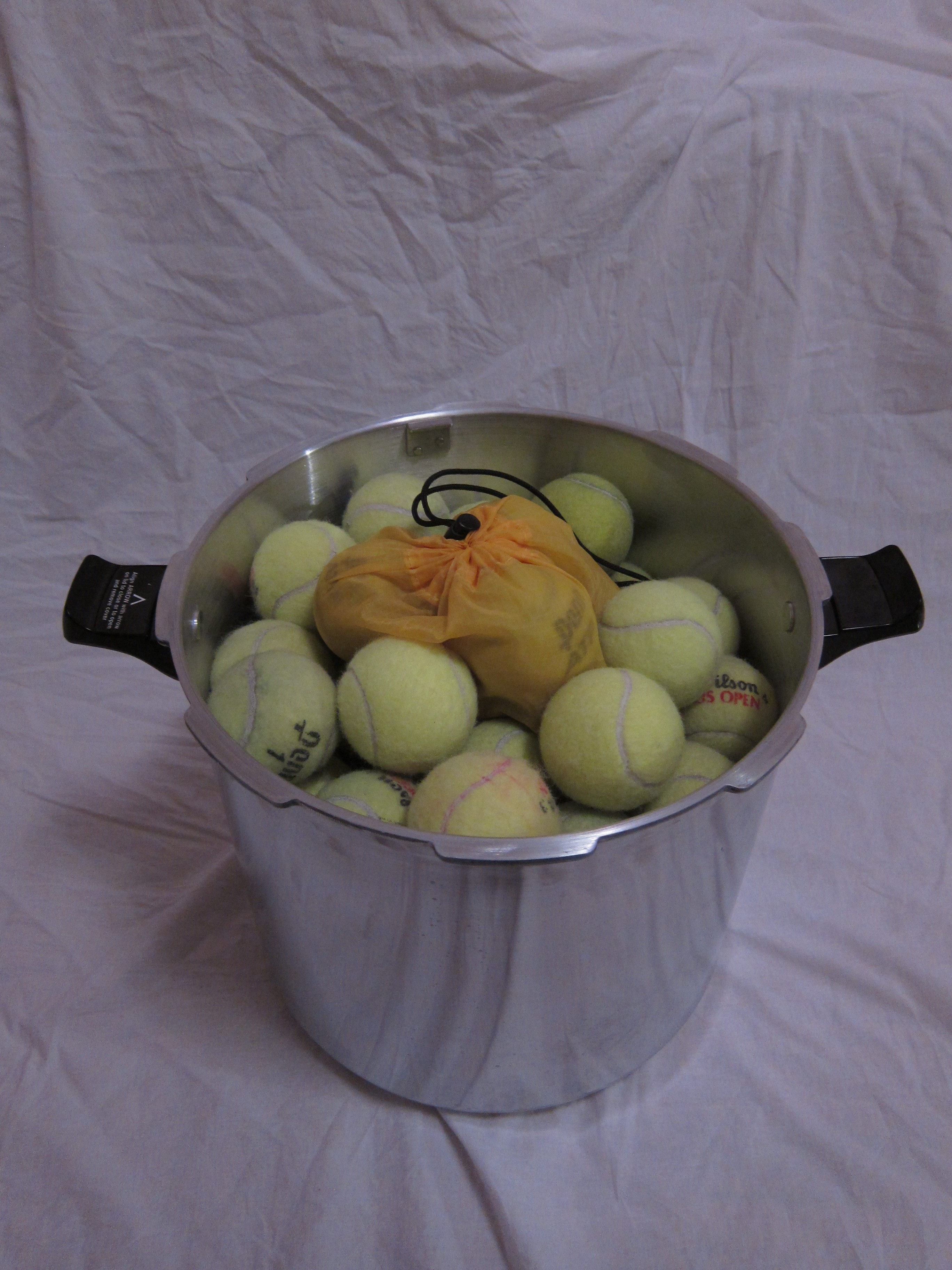 The annoying issue with Tennis balls is, that after only a few days they start to lose their bounce. I was annoyed and intrigued this and used a modified pressure canner to reverse the process to revive old balls and keep them bouncing. The final result can store around 60 Tennis balls and keep them bouncing forever (or at least until the felt is completely worn off). In the following I will describe some specs of my homemade tennis ball pressurizer.

Tennis balls are pressurized and over time air escapes from the inside and the pressure drops. That results is poorly bouncing balls and finally, us buying new balls.  If we can store the balls at a higher pressure, this process can be slowed and even reversed! That is what all this is about.

The internal pressure of Tennis balls is about 14psi or 1 bar. If the ball hits the ground, the internal air is further compressed and acts as a spring leading to nicely bouncing balls. The problem is that the balls are not perfectly airtight – this means over time that internal pressure drops. This process is independent of us playing with the balls. It just happens. That is the reason why the ball canisters are pressurized, that way that pressure drop is prevented (until we open that can).

The bottom line is that even without us playing, the Tennis balls will get bad or dead after some time. That is in particular frustrating, as in most cases the felt of the balls is still quite good. It feels to be a waste to have to buy new balls even if the old ones still seem to be in decent shape.

So what if that process can be reversed?

As a matter of fact you can revitalize dead balls. The only thing you have to do is to increase the internal air pressure to a level as if they were new. Some internet research leads you to companies selling such devices. The Pressure Ball is one of those and I took the risk and bought it. It works really well, but I was annoyed by the process of fiddling balls in and out of the tube all the time. In particular if you have many balls this is really annoying. There are other products out there, that allow to pressurize many balls at once in a larger vessel. One of them is the Ball Charger, but the price is also much higher.

Inspired by the principle and that it actually works, I started out to build my DIY tennis ball pressurizer… 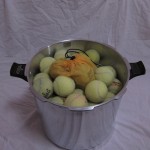 What I am going to present in the following involves handling larger amounts of compressed air. That is potentially very dangerous and I do not guarantee that anything what I present is actually safe to do so. Proceed at your own risk.

The main problem for such a Do-it-yourself project is, to get a decent pressure vessel. The good thing is, that the pressure the Tennis balls require is relatively low.  They are stored at ca. 14 psi and Pressure Ball recommends to increase the pressure up to 20 psi in order to restore balls. So that is the basic requirement, an airtight container that can withstand up to 20+ psi and it is large enough to fit a decent amount of tennis balls. As it turns out getting a proper container is not that simple. There are pressure pots for painting, but they tend to be very expensive.

So I opted for another option, a 23 quart pressure canner from Amazon.

There are four holes in the lid of the canner that have to be prepared and finally make airtight. At first place they are closed by some plugs, but they are not built to be completely airtight. Therefore one has to tweak some of them a little…

1) The center hole is easy. Just screw in the pressure gauge and you are done. I was afraid that this one might not be airtight, but it is.

2) The air vent: This one should actually seal when there is internal pressure, but for me it did not. A quick fix was to add a layer of soft latex (I just cut a little bit of the Thera Band Exercise Band I had lying around), and added it as a sealing. That just works fine. In case that would not have worked, I would have just sealed that hole using silicone or something.

3) The vent pipe: This one provides a nice nozzle on which I put a pipe and a valve. I use this valve to depressurize the container.

4) The overpressure plug hole: This one is just too small to fit a quarter inch thread for the valve. I used a knive to scrape off some material to make it fit. This is really a matter of just a little bit until the valve went in. I used lots of teflon tape and a counter nut to fix and seal the valve. On this side I connect the bicycle pump. As the pump is not completely airtight, I have to close the valve once the pressurizing is complete. 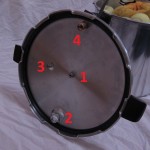 In the end it was pretty straightforward and as far as I can tell, having just used it overnight, the pressure vessel seems to be airtight.

Some more about safety

By doing this, there is nothing left to prevent overpressure. The only think that is between you and an exploding tank is your brains. When increasing the pressure watch the pressure gauge closely and do not put too much pressure in it. Be sure that the gauge is working properly. Even with a bicycle pump you can reach dangerous pressure levels! I cannot recommend you any pressure you can put into the tank safely. In the end that will depend on the pressure tank you use and how large you want the safety margin to be.  You will have to decide that yourself and I do not want to be held responsible for any exploding tanks.

If you test your device, fill it up with water as high as possible, that way the amount of compressed air is reduced and you might have less severe injuries if something blows up.

Do not, or if so super cautious, use a compressor to pressurize the vessel. By doing so you can easily increase the pressure to dangerous levels. They can easily produce super high pressures.

More pictures and the conclusion

So far I am happy with the result. The container is airtight and the handling seems to be good. The nice thing, compared to the Pressure Ball pipes, is that you just put in the balls and pressurize. No fiddling with balls in and out. I can even keep them in a bag, so I just grab the bag and I am good to go. To  pressurize the canner I need about 60 strokes of my bike pump. Not too bad. It takes some time, but is not crazy long.

And finally, the rest of the pictures: