Warning: The magic method HM\BackUpWordPress\Notices::__wakeup() must have public visibility in /is/htdocs/wp10661992_23FCWG6Q2E/www/projects/wp-content/plugins/backupwordpress/classes/class-notices.php on line 46

Warning: The magic method HM\BackUpWordPress\Path::__wakeup() must have public visibility in /is/htdocs/wp10661992_23FCWG6Q2E/www/projects/wp-content/plugins/backupwordpress/classes/class-path.php on line 57

Warning: The magic method HM\BackUpWordPress\Extensions::__wakeup() must have public visibility in /is/htdocs/wp10661992_23FCWG6Q2E/www/projects/wp-content/plugins/backupwordpress/classes/class-extensions.php on line 35
 Triangle Hammock || Dreieckshängematte – Only some projects
Skip to content 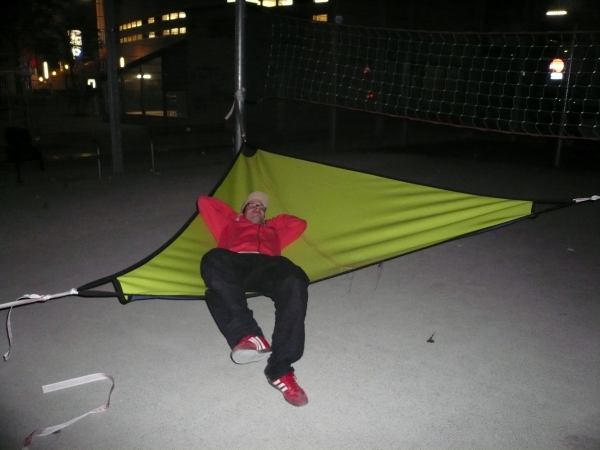 The project I want to present this time is a special

The basic idea of the project is quite simply, by extending the idea of a hammock, which has two anchor points, a third anchor point is added. By doing so, a certain area can be spanned, creating a flat surface to lie on. This can be seen as a variation of a three point hammock. 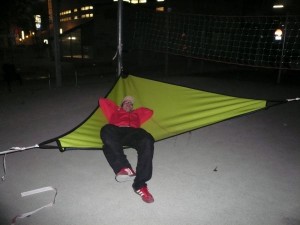 Ok, so lets get started….

The project was once more in conjunction with Chris, with whom we “invented” the triangle hammock. The picture on top shows the first version of the triangle, which was super sturdy and pretty bulky. At that point we were not really sure on how big the tension on the fabric will be and went with a stronger material.  I did a serious refinement  which resulted in a much lighter system, where the tightening mechanism was improved a lot as well. Even though the details of the second version were majorly improved, the basic idea stayed the same. I will now only present this latest version.

As comparison, I show the first and second version side by side. The new version (on the right) weighs about 1.9 kg, including all ropes to attach it to trees. 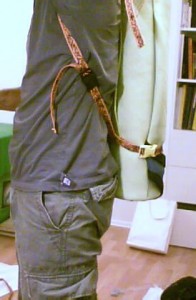 In theory the whole project is straightforward. It simply consists of a triangle shape fabric with attachment points on the corners. Each corner is then attached to one tree and then the hammock has to be tightened. In contrast to ordinary hammocks, where there is always a large amount of slack in the system, this one should be as tight as possible. Thus a relatively flat surface is created, on which one can lie.

The left image below shows the setup of one corner. The bottle represents the tree and one can see the loose end running downwards.  On the tree side of the rope a carabiner is fixed. The rope is put around the tree (twice in that case) and the carabiner is clipped in the rope. This carabiner is also used to remove the tension of the sytem – simply unclip one carabiner and the whole structure is released of tension.

The right image shows the garda hitch. If you pull on the rope that is pointing downwards the system is tightened up. In the other direction the garda hitch blocks. 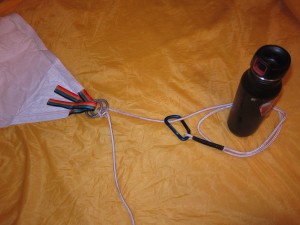 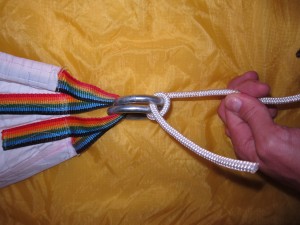 The triangle consists of of a medium sturdy fabric, unfortunately I do not have any specific data on the fabric. It is some artificial material, maybe some stronger nylon. I did some very rough tests of the fabric strength and it ripped at about 22kg/cm. The sidelength of the triangle is 3m, that makes it large enough for two persons to lie in it. Running around the  edges of the whole triangle is a webbing (in rainbow colors in the pictures) which is supposed to distribute the tension from the anchor points into the fabric. The triangle fabric is folded twice around the webbing, thus the force on the seam is reduced.

For the fixation of the hammock it is important to have a tightening mechanism, as this allows to tighten the system easily. On each corner there are two metal rings attached. Those allow to make a Garda hitch and tighten up the hammock. Having the garda hitch on the hammock side has the advantage of creating a (somewhat poor) pulley system

The top and bottom webbing is the one which runs around the triangle and is hidden by the triangle fabric. To further spread the forces coming from the anchor point, an additional loop of webbing is added, which is sewed to the fabric. Also, the corner has been reinforced by a second layer of fabric, thus further reducing the risk of breakage in that region (all the tension culminated in the edges which makes it the most likely point of failure). 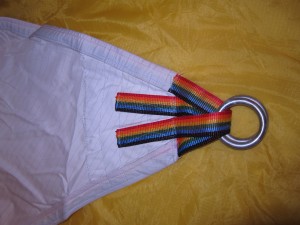 The biggest drawback of the system is to find the proper trees. They have to be equally spaced and their distance has to be in a certain window. Otherwise the tension in the hammock is asymmetric or, due to the long rope to the tree, it gets very slack once loaded with the body weight. This limits the possibilities on where one can actually set the triangle up and resulted more than once in a longer search for a good spot. Once that is accomplished, the system is just great. It has a good size that two persons can actually fit into the hammock and lie next to each other. As the system is quite tight, it will stay relatively flat even if loaded with two persons. Consequently, one will not be pushed together and it allows to lie on the side (which is simply impossible for an ordinary hammock).

The size and weight of the system is quite good, it fits easily into a backpack. I am not really sure on how much lighter one could make it. At this point I use two steel rings, who can be replaced with aluminum rings, which would save some weight. Also, the length of the attachment ropes is too long, usually 2-3 m are sufficient. Otherwise the system cannot be tensionned anyways. I suspect that for the fabric itself, one could also use a lighter one, as the weight is usually distributed over a larger area, thus reducing any local stress. I still prefer to be on the save side and thus did not push it any further.