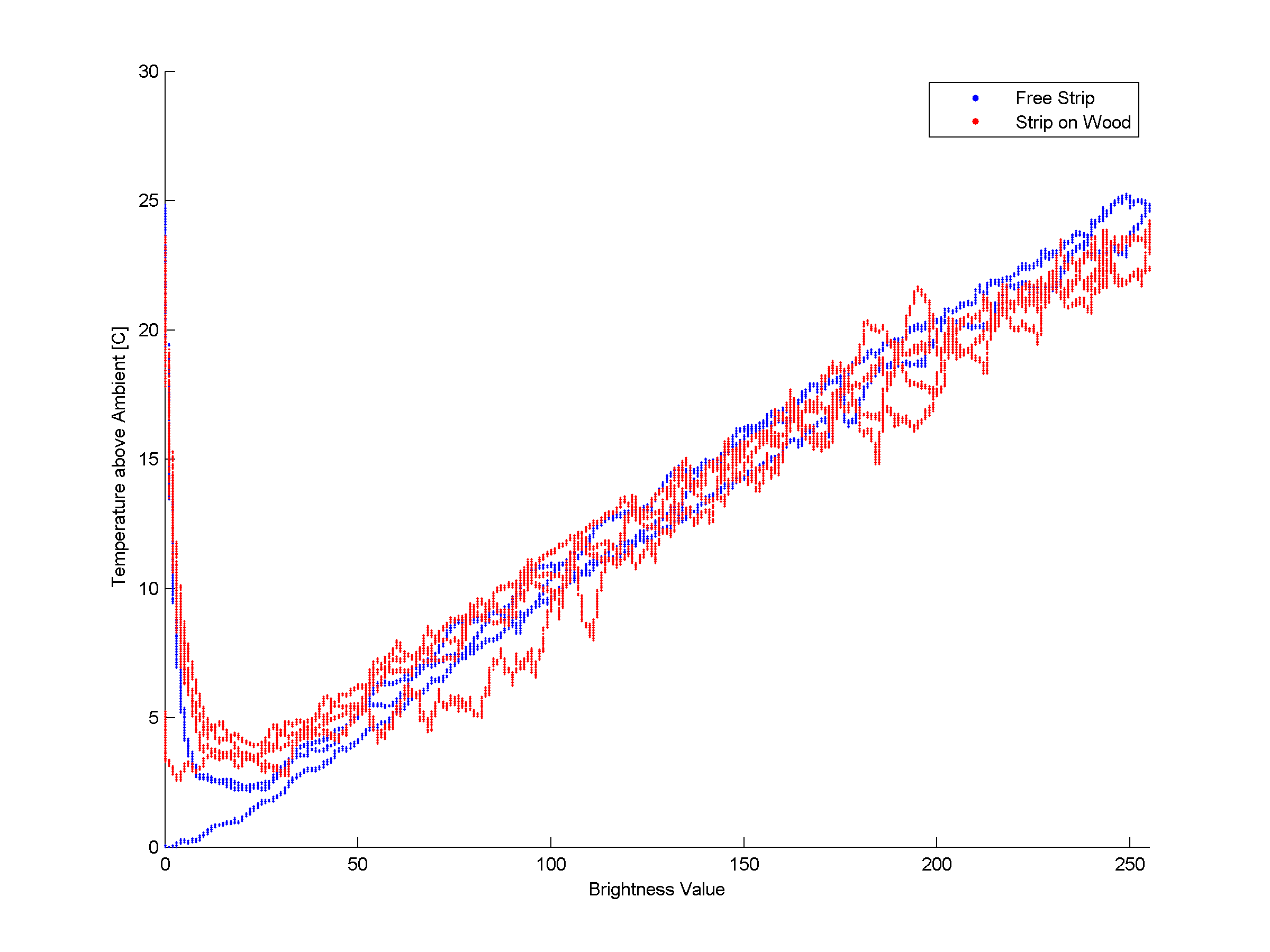 Recently, I started playing with the Neopixel (WS2812B) individually addressable digital led strips. For the project I have in mind the tightly packed 144 led per meter strip seems the best solution. However, having some experience with leds, I was not sure about the temperature a strip could reach when run at high brightness levels for some time.

So I decided to measure the temperature on a strip of 8 leds as a function of the brightness value.

In order to measure the temperature of the 8 led strip, I cut open the protecting transparent cover and inserted a small temperature sensor (DS18B20) on the side of the led. Additionally, I record the ambient temperature (also with a DS18B20). The strip looks like this: 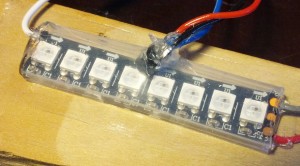 In the center you see the cables for the temperature sensor, on the left is the signal wire and on the right the voltage supply.

To actually test the strip, I wrote an arduino program that monitors the temperature and slowly increases the brightness value. I had the code set so that the level was kept constant for one minute. If the level reached 255 (the maximum) it went back to zero and started again. At all times I treated the colors equal, set to the same brightness. As I was not sure how the mounting would affect the temperature, I tested two different conditions: 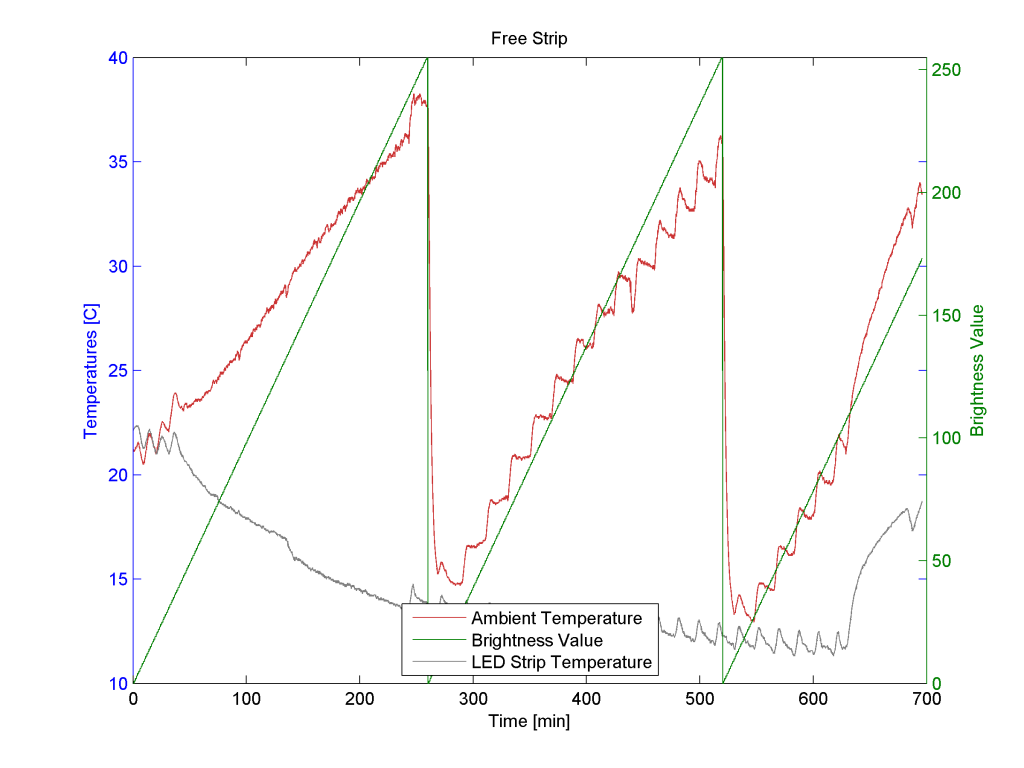 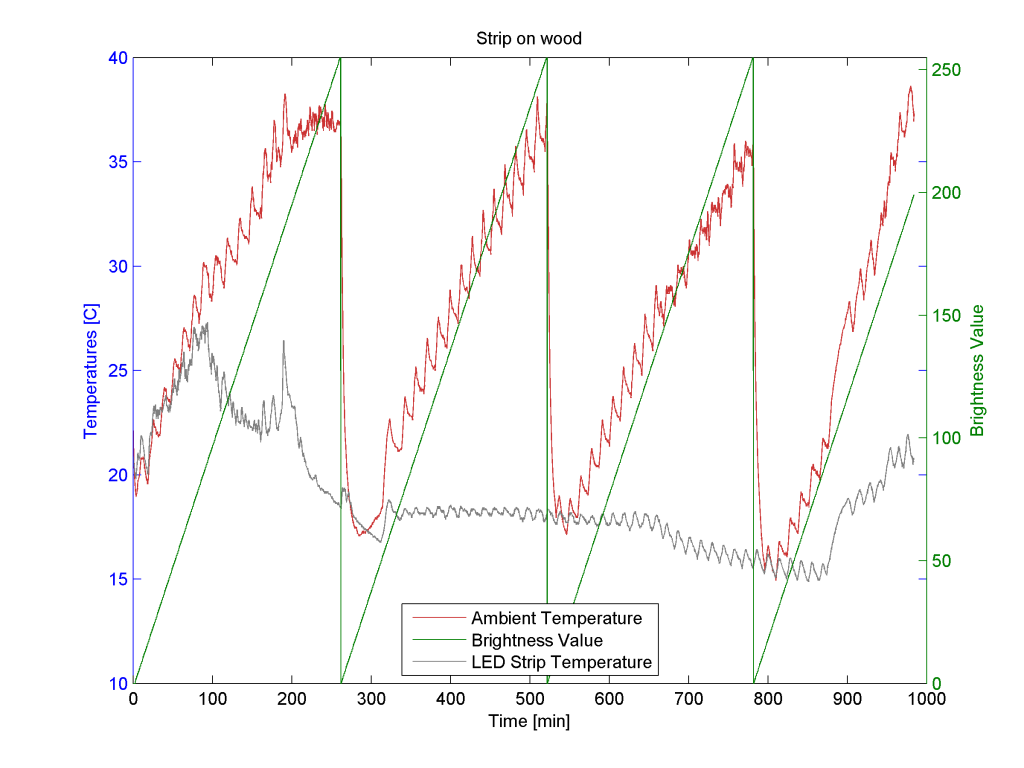 And finally, and perhaps most interesting, the strip temperature (above ambient temperature) as function of the brightness value. 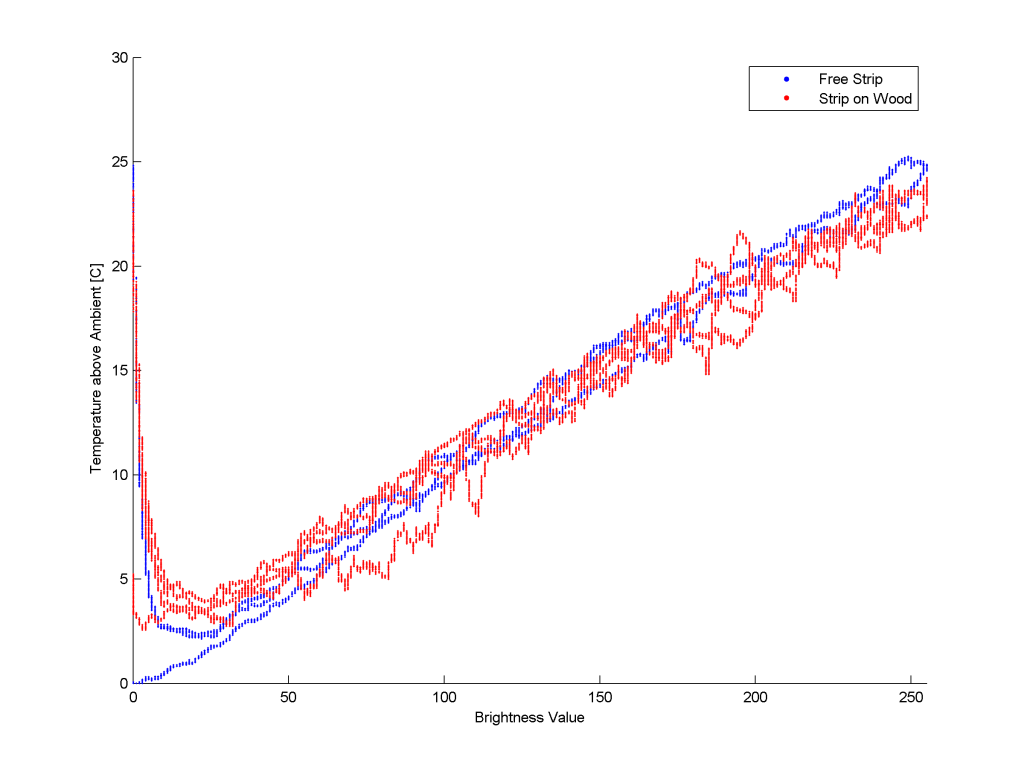 My personal conclusion is that unless you are running the strips in super hot environments or very tightly packed, there is no need to worry about temperatures. In particular as any animation will result in average brightnesses that are well below the maximum I tested here.

As side effect of this measurement, I also recorded the indoor temperature at my apartment at my home in the USA. The house is a three story house, wooden construction and we are in the first (ground) floor. As it happend, the nights were pretty cold, with about -11 to -12 C minimum.

I started the recording in the evening and at some point I turned the heat off and went to bed. You can clearly see in the graphs that the room temperature falls from around 22C to below 15 C.

The crazy zig-zag is due to the heating system. We have forced air, which is basically a big hot air blower in the basement that blows warm air into the rooms. Combined with a poorly insulated house and less thermal inertia, this means that he place heats up super quickly, but also cools down very fast. You see that at some point the temperature falls by about 10C in almost 3hrs. That is pretty fast – 3C per hour!